I have created a new scarf from a close-up photograph of the bark of a weeping willow at King’s College, Cambridge. Details of the scarf are here.

The new scarf is an addition to my other tree bark scarves.

Like all of the tree bark scarves, its abstract image shimmers with colour and looks fantastic when worn with something plain. The 100% satin silk scarf is printed and made in Britain. It comes boxed and with a pamphlet, which is both in English and Chinese. The scarf has a fantastic back story.

Xu Zhimo is regarded as the father of modern Chinese poetry and he came to King’s College in 1921 to study. Up until this point in his education his focus had been on politics, sociology and history. However, whilst at King’s, he had an epiphany and started to write poetry. He was also introduced to the canon of the English poetic tradition, (some of which he translated into Chinese) and met and formed life-long bonds with many significant contributors to new and experimental ideas in art, music and literature that were blossoming in Britain at the time.

“Second Farewell to Cambridge”, 再别康桥, is learnt by every school child in China.

Xu was to visit Cambridge twice more and following the second of these visits in 1928 he wrote the poem “Second Farewell to Cambridge”, which is now learnt by every schoolchild in China as part of their introduction to modern poetry.

In July 2008, a memorial stone, in white Beijing marble, was installed in King’s. This memorial to Xu Zhimo is adjacent to the path near the willows by the bridge over the Cam, and is inscribed with the first and last two lines of “Second Farewell to Cambridge”. It is the first memorial to Xu Zhimo outside China, and forms the focal point of a garden, which honours his memory and his time in Cambridge.

The scarf is available online here and at the Shop at King’s on King’s Parade. 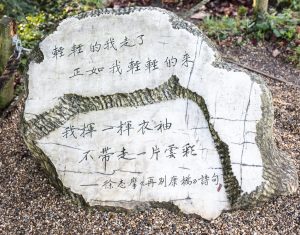